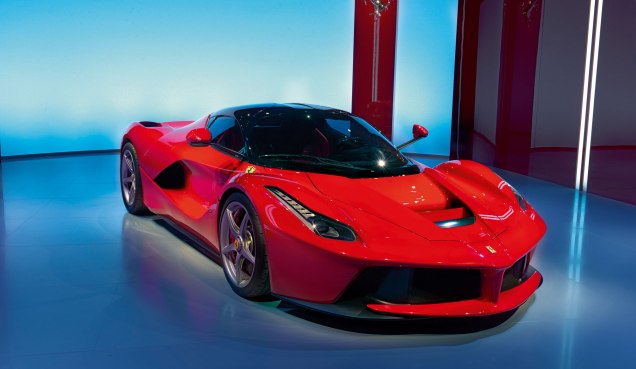 The Ferrari LaFerrari is one of the top cars in the world right now and is set to get a little bit better in 2017. In an interview with Automobile, Sergio Marchionne CEO of Ferrari confirmed that the Spider was in development and that potential customers had already been approached. One of these customers is professional Chef and swearing enthusiast Gordon Ramsey, who on the debut episode of Top Gear confirmed he would be getting one, and was able to show off the key given to him by Ferrari.

Practically nothing is known about the Spider as Ferrari has only just confirmed it themselves, but Autocar magazine speculates that it will have a similar electric folding roof arrangement as both the California and 488 Spider. Another option for the Spider would be a removable targa top similar to Koenigseggs much of the other options for the LaFerrari will likely be the same including the 950BHP V12 hybrid engine.

This will also leave Ferrari rivals McLaren as the only company of the big three to not have a convertible version of their hyper car as the Porsche 918 Spyder had a removable roof from launch. While no convertible P1 has been announced it is likely we will see one emerge by the end of the year in concept form at least as McLaren will just be leaving money on the table for the other players to just pick up.

It’s a great time to be a driver isn’t it, there are so many great cars out there right now, and it seems we are getting a return of some truly brilliant cars, the sports cars. Sports cars have waned in popularity over the years, people are choosing to go for more practical hot hatches rather than the fun two-seaters. We saw the death of the Honda S2000 in 2009 and the MR2 gave up 2 years before that. Mazda had also appeared to stop bothering with the MX5 for a while.

But now I am happy to say the sports car is back, we of course have the fantastic Toyota/Subaru/Scion GT86/BRZ/FRS, and then we have the new MX5 next year to look forward to. We really are seeing a return of the true greats, however the Germans appear to be letting it slip the Z4 is starting to look a little tired, and the SLK has been overtaken completely, even by other cars within the Mercedes range.

The Italians are trying again as well with the Alfa Romeo 4C, which although being hilariously over priced is fantastic fun to drive. There are also rumours hovering around that Abarth may announce a new car this year based on the failed Mazda Alfa collaboration, and personally I think a modern RWD Barchetta would really energise the current Fiat line up which hasn’t had a truly fun sports car since the original Barchetta died back in 2005.

We do appear to have three top contenders for the crown of top sports car now, which has been severely lacking in recent years, the new MX5 will undoubtedly be there for Japan the Italians will wield the 4C and the Germans can bring the excellent handling of the Porsche Cayman. Three great cars for the modern era of sports cars we can only hope that the sports car doesn’t go away like it did before as they are some of the most fun cars you can drive.